Meet the Veterinarians & Team of Westboro Animal Hospital in Ottawa! We’re pleased to provide exceptional vet care for your pets! 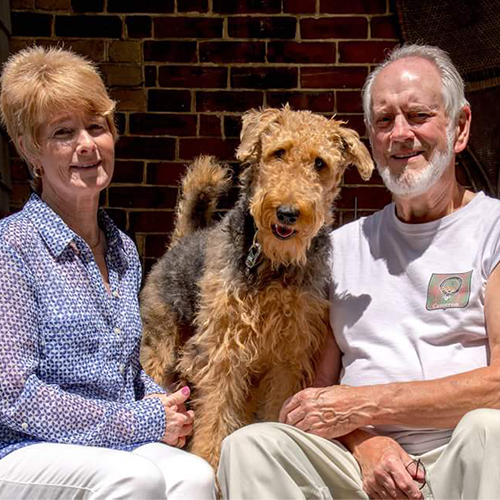 Dr. Alvin Cameron was born and raised in Ottawa, graduating from the Ontario Veterinary College in 1966, and emigrating as a newly married couple, with his wife Carol, to a veterinary practice in Chicago, the goal being to pay off his school loans. By 1970, although now a full partner, but homesick, he realized it was time to return to Canada.

After a brief stint practising as a locum in Thornhill, he and Carol opened the Maple Veterinary Office, his focus for the next 17 years. In 1989, a need to be closer to family led him back to Ottawa, initially intended as a semi-retirement. However, after practising again as a locum veterinarian at several practices in the area, he again decided to establish his own animal hospital, opening on December 4, 1992 as The Westboro Animal Hospital.

Dr. Alvin Cameron is still very much involved in clinic decisions including the recent expansions, but has largely passed the day to day torch to his son Dr. Ian Cameron. 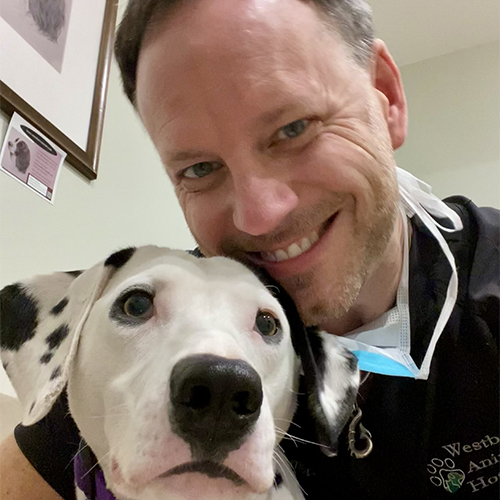 Dr. Ian Cameron has been working in veterinary hospitals since the age of seven (41 years). As a boy he enjoyed helping his father and assisting in hospital duties while working at the Maple Veterinary Office north of Toronto. In 1988 he moved with his family to Ottawa and in 1991 assisted his father in the construction of the Westboro Animal Hospital. After completing his BSc. (Honours) in Biology in 1997 at the University of Ottawa, he decided to follow in his father’s footsteps and graduated from the Ontario Veterinary College in 2001. Over the past 20 years, Ian has dedicated his life as a veterinarian to assist in providing competent veterinary care for the Ottawa region. During this time, he has helped many rescue organizations such as Freedom Dog Rescue, Ottawa Dog Rescue, Potcake Place, and the SPCA. For his contributions to rescue groups in Turks and Caicos in 2013 and 2014, Dr. Cameron was invited to join the Turks and Caicos Veterinary Association. Ian and his family are major donators to the Humane Society of Ottawa, and his animals have always been rescues. Dr. Cameron will complete the Certified Canine Rehabilitation Therapist program (CCRT) in 2021, prior to construction of a new facility in Westboro in early 2022. In his spare time, Ian enjoys playing guitar, hockey and watersports, as well spending time with his family, including his cat Bandit and his dog Mia. 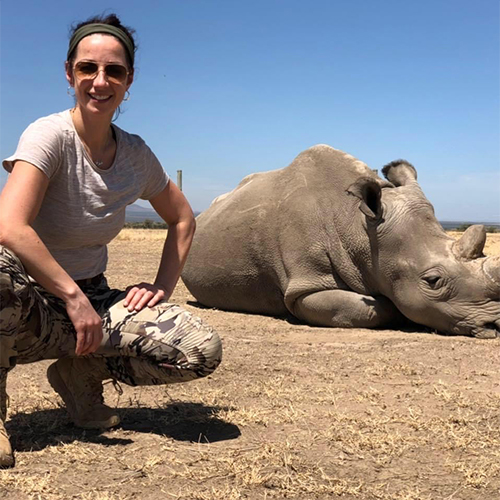 Originally from Newfoundland and now residing in Ottawa, Ontario, Dr. Laite is a ‘99 graduate of the Nova Scotia Agricultural College (BSc Agriculture), a 2004 graduate of the Atlantic Veterinary College (DVM) and has been part of the Westboro team since 2009. Her love of veterinary medicine started at only 5 years of age, and never wavered. Also working as a firefighter with Ottawa Fire Services since 2016 while still practicing veterinary medicine, both local and international rescue work and wildlife conservation plays a major role in her life. After several weeks at Ol Pejeta Conservancy (Kenya) in 2018 and working with Sudan – the last male Northern white rhino – this first-hand experience and that which followed has allowed her to speak from a different platform with a deeper knowledge and commitment to conservation. 2019 then took her to Malilangwe, Zimbabwe, on a conservation based Wildlife Immobilization Course – a lead training course in chemical and physical restraint of African wild animals, emphasizing community involvement and conservation. Soon after she became the only Canadian board member on the international charity for rhino conservation (Helping Rhinos). 2020 led her to Australia, as part of a search and rescue team for injured wildlife and providing veterinary care, as well as a long awaited visit to the Zululand Rhino Orphanage. She also tends to the animals at a rescue-based Reptile and Nature Park just outside Ottawa, volunteers time with a local wildlife rescue and by the end of August, 2021, she will also have attended a Canadian Wildlife Chemical Immobilization Course through the University of Calgary. Despite her love of working with wildlife and traveling abroad, a great part of her heart will always be reserved for her canine and feline patients, animal rescue, her love of internal medicine and the dedicated, compassionate team she works with at Westboro Animal Hospital. 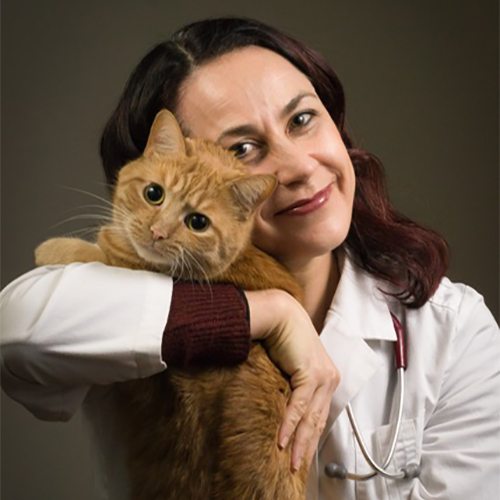 Dr. Karen Sime graduated from the Ontario Veterinary College at the University of Guelph in 1998. She has practiced small animal medicine in Ottawa since then and has been with Westboro Animal Hospital since 2015.

She has a special interest in feline medicine and behaviour and she also loves surgery and dentistry. She loves getting to know her clients and patients and has a soft spot for the shy and scared ones.

She shares her home with her husband, Mike, and two adorable ginger cats who were both adopted from the Ottawa Humane Society. When she is not working, she enjoys volunteering at the shelter, practicing Ashtanga Yoga, doing Barre classes, and reading or napping with her cats. She also enjoys traveling and adventures on a motorcycle with her husband, including a cross country trip in 2010 and motorcycling in Italy and the Austrian Alps. She has also enjoyed trips to visit her brother in Taiwan and side trips to Japan, Vietnam and Thailand. She looks forward to the day when travel will be possible again! 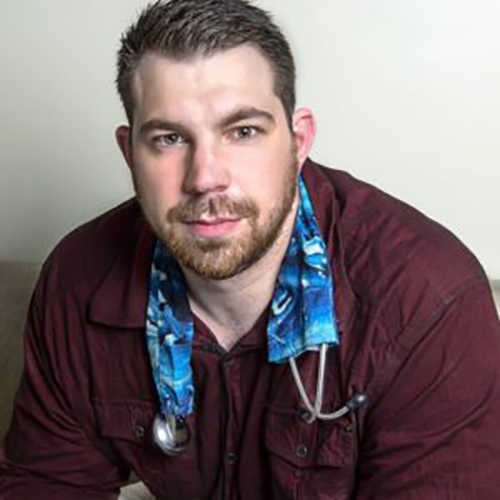 Dr. Clark is a valued locum veterinarian. He performs a large number of surgeries including cruciate ligament surgeries (lateral fabellar sutures, tightrope, and TPLO techniques), fracture repair, hip surgeries, and a large number of complicated soft tissue surgeries. He enjoys getting to know clients and is very invested in their pets. 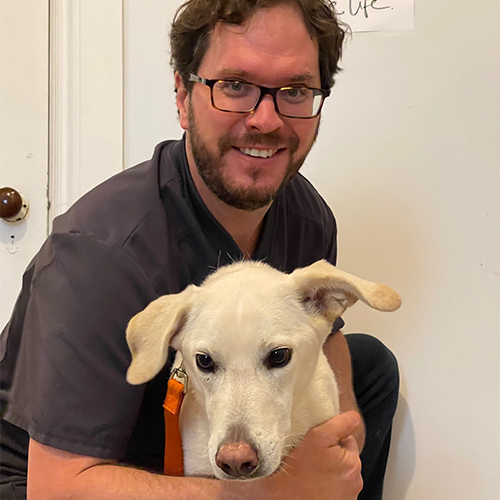 Daniel has a background in math and physics, and he incorporates problem solving skills on a daily basis balancing duties in many areas of the clinic. He has two children, one each in middle and high school, and a rescue dog named Phoebe from Freedom Dog Rescue who loves group hugs. He stays active playing hockey and his saxophone. 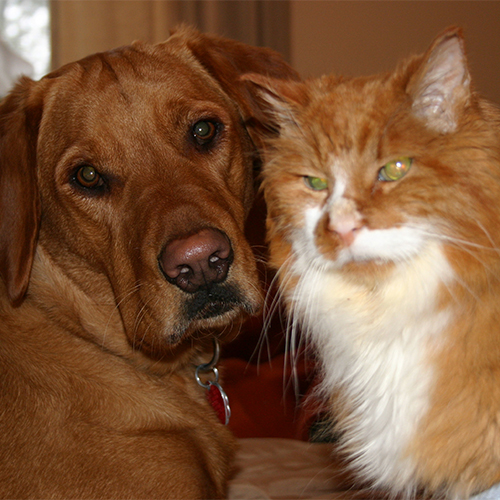 Christine is a Registered Veterinary Technician who graduated from the Veterinary Technology program at St. Lawrence College, Kingston in 2003. Christine joined Westboro Animal Hospital in January 2004 and has nurtured the staff over the years, many of them starting as co-op students. She has a strong compassion for the human-animal bond. In 2014 she became Assistant Manager and most recently in January 2021 has taken on the position of Hospital Manager. Every animal that has lived with her has “chosen” her. In her spare time she enjoys photography, sunsets, exploring nature through hiking and spending time with her hubby. 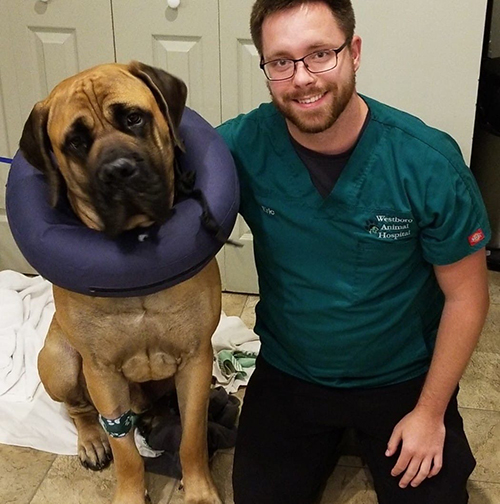 He has always had a passion to help others and a strong interest in animals which lead him to working at an animal hospital. He strives to create a pleasant and inviting experience for clients and patients.

Eric is Walkin Wheels Certified in assembling, fitting, adjusting, and the proper utilization of the Walkin’ Wheels for disabled pets.

Eric is in the process of getting certified as a Canine Rehabilitation Assistant (CCRA). 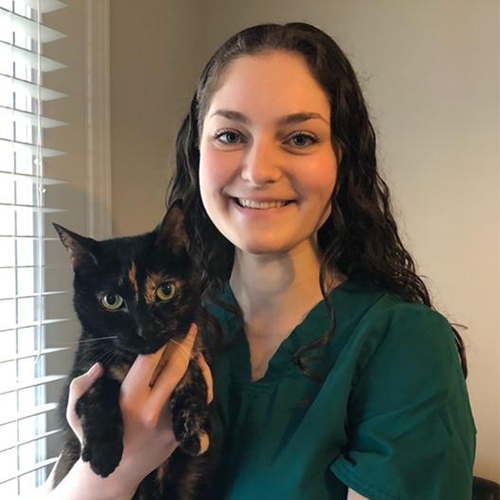 Grace graduated the Veterinary Technician program at Algonquin College in May 2019 and began working here at Westboro Animal Hospital in June 2019. She was able to write the registration exam soon after, and earned her title as RVT! Grace absolutely loves caring for animals and especially enjoys performing dental cleanings and all the tasks involved in assisting with surgical procedures. She has two cats named Autumn and Emerald, a tree frog named Terrance, and an aquarium of fish. When Grace is not working at the clinic, she enjoys going hiking, working out at the gym, and spending time with her family.

Grace is in the process of getting certified as a Canine Rehabilitation Veterinary Nurse (CCRVN). 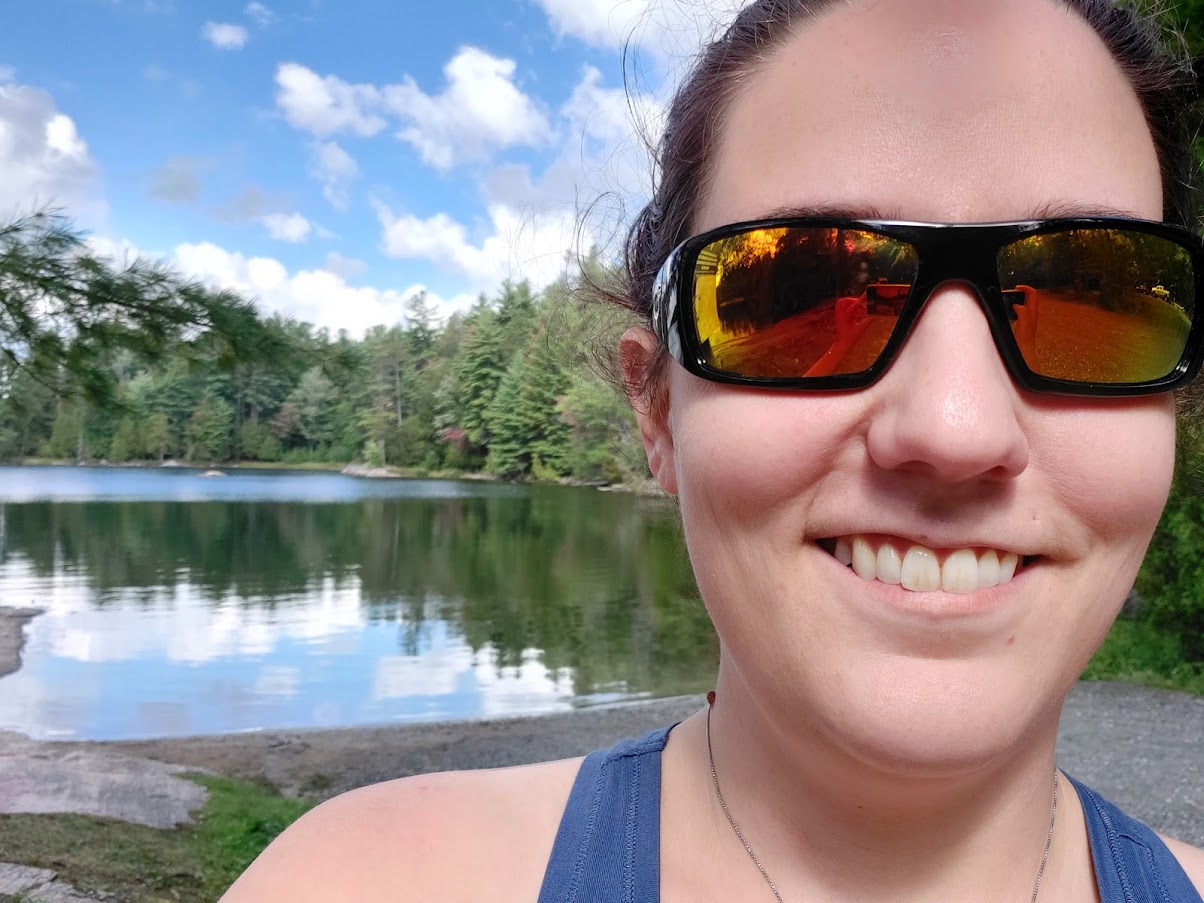 Kayla is an Algonquin College graduate as both a Certified Veterinary Assistant and Register Veterinary Technician. She loves getting to know clients and building bonds with them and their pets. She likes performing laboratory work including specimen collection and analysis.

She used to live on a farm with Ostrich in her youth. She now lives with several cats and likes going on adventures and camping out. 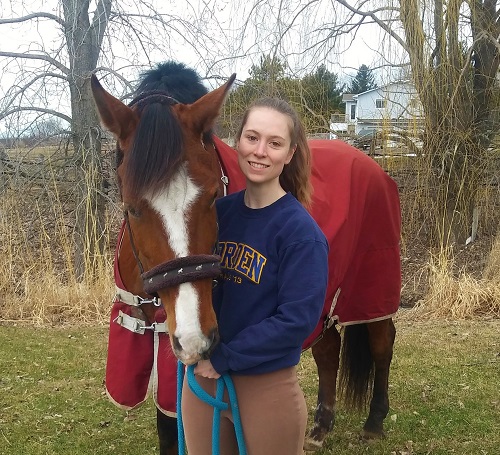 After graduating from the University of Guelph in 2017 with a BBRM major in Equine Management, Laura continued her education in animal care by completing the Veterinary Technician program at Algonquin College in 2019. Since then, she has worked in shelter medicine and gained experience in small animal emergency and critical care. While her focus is now caring for your small animal pets, Laura still enjoys spending time at the barn, riding, and working with horses. 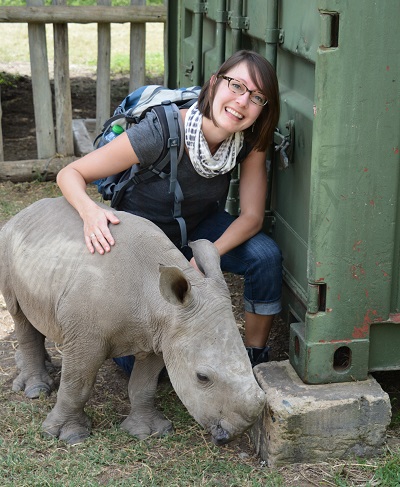 Originally from Saskatchewan, Jen graduated from the veterinary technology program at SIAST in 2002. She is once again an Ottawa resident, living here in between overseas postings with her husband who works for Global Affairs Canada. Jen joined the Westboro team in 2022, having returned to Canada after seven years in Africa, split between Kenya and Nigeria.

During her time in Kenya, Jen helped build TNR Trust Nairobi, a charitable organization that supports low income communities with spay/neuter and rabies vaccine campaigns. As part of TNR, Jen worked with the team that designed a mobile clinic, and she personally fostered more than 25 street dogs and cats in her home. Jen also volunteered at her favorite wildlife conservancy in Kenya, Nanyuki-based Ol Pejeta. Jen spent several weeks at Ol Pejeta with Westboro’s Dr. Cheryl Laite, assisting with the conservancy’s population of Northern White Rhinos and chimpanzees.
Jen shares her home with her Libyan street cat Hudson, who lets Jen and her husband live with him in exchange for treats and the occasional snuggle. Hudson was rescued from the streets of Tripoli and evacuated with her husband during the civil war.
In her free time, Jen enjoys kayaking, barre fitness, traveling, and crafting! 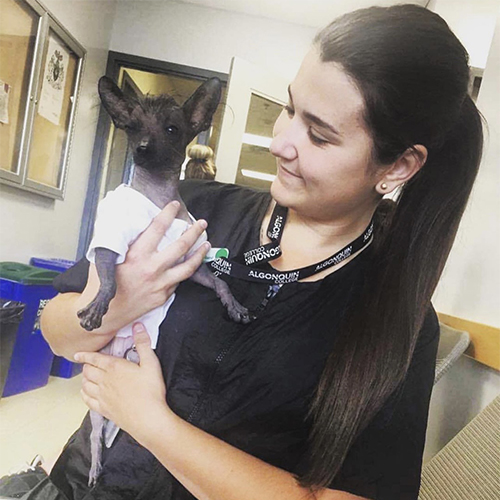 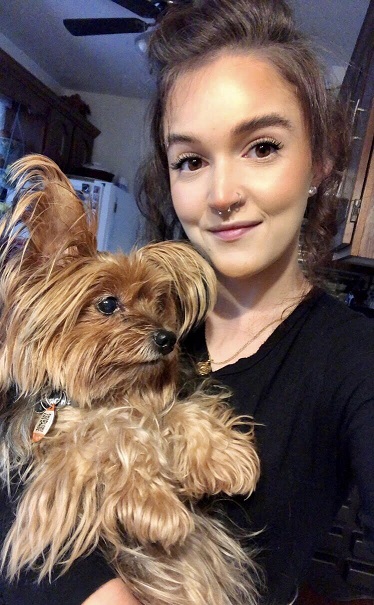 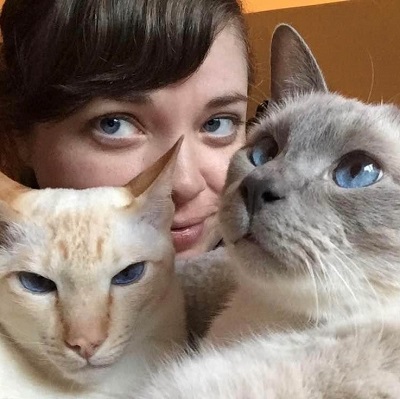 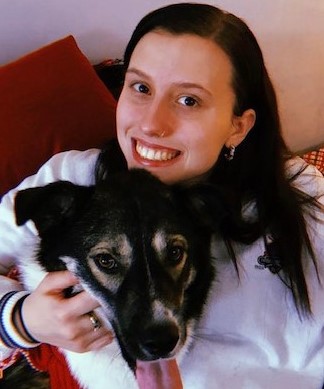